RIP my dearest friend. There’s a special bond created with a pet, and a dog truly is a human’s best friend. Draco wasn’t just a dog. Or a pet. He was my oldest and dearest friend. My most loyal homie. He was cuddled beside me for every novel i’ve ever written.  For every good moment and bad.

Getting Draco in 2004 was the best decision I’d ever made, but twelve years just doesn’t seem long enough. One of my friends explained it best the other day. This is one of life’s cruelest ways…to create and give the most loyal and perfect companion with too short a life to live.

If I’ve learned anything over these last 12 years, it’s that people can be cruel, selfish and just plain gross. A human bond whether by blood or by friendship is one that can be broken. A human can walk away at any time, but you know your furry companion will never abuse you, judge you, or leave you. An unconditional bond of love. And with that bond you always have the perfect companion, so even while the rest of the world is busy and moving, you are never alone.

Artists and writers can often find themselves in solitude. While the world sleeps, we create. Being an artist and writer often proves to be lonely, but an animal companion counters that feeling.

I’ve had other pets and met many other dogs throughout my life, but Draco was special in many ways.

When I was told his birthday was August 22nd, I knew he was meant to be my special little guy. My birthday is the 23rd, and we celebrated both days together every year.

His name was supposed Gryffindor, but he was a tiny lil black puffball with a solid white goatee. The tips of his paws were also white and a stripe down his belly. The white patches made me think of the Malfoys with their dark robes and white hair, so I switched his name. Draco is also latin for dragon, and he has his own constellation. So, a powerful name to counter the fact that Draco Malfoy was actually a cowardly jerk in HP.

I called him my Little Pumpkin because I got him shortly before Halloween of ’04 and stuffed him in a pumpkin costume like three sizes too big. Adorable. I hope I can find the pictures. 😦

Draco didn’t lick anyone. Ever. Maybe he would if you had Dorito cheese or peanut butter on your finger, but the act was rare. He never licked anyone just to lick. Instead he would get close and give “sniff” kisses.

He never jumped. He’d paw at my shoe and let out one lil growl or “ruff” if he wanted to cuddle and watch tv. I’d scoop him up at bedtime, and since 2004 I never had to sleep alone. His little legs just never really made it far off the ground.

I probably had one of the only dogs who didn’t lick or like bowls. He was scared of bowls and would only drink out of certain ones. His food was served on a placemat of his preference. His last food mat was Star Wars because Draco was a geek like me.

Draco loved music. If I turned on music to clean or brainstorm, he would dance around and smack his paws on the floor until I grabbed a toy to play. He was a rocker dog and perked up most for Papa Roach and Disturbed. He also had a soft spot for Glee soundtrack mashups and I won’t let you judge him for that.

Plushies were his favorite toy, and he loved to play fetch and a mild game of tug.

Even as a pup, Draco was well behaved and chill. He always knew which toys were his and which were not. You could leave anything in the floor and he wouldn’t touch it. Shoes, phones, or whatever. I’ve sat drinks next to me while sitting on the floor and walked away, but Draco never touched them. Most dogs I know would run over and start drinking.

I’ve never met such a well behaved dog, and I’m not saying that because I’m biased. I’ve loved other pets before, but none were as chill and well behaved. The only bad thing he ever did was pee on my bed once as a puppy, and who can really be mad at that?

He truly was the best in every way. He was the most loving lil guy with a big heart—apparently too big for his tiny body.

RIP lil man ❤ If there is an otherside, I hope to see you there. Twelve years could never be enough. If I discover a TARDIS, I’ll go back and we’ll become Time Lord and Companion. 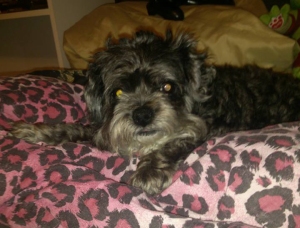 One thought on “RIP My Dearest Friend”